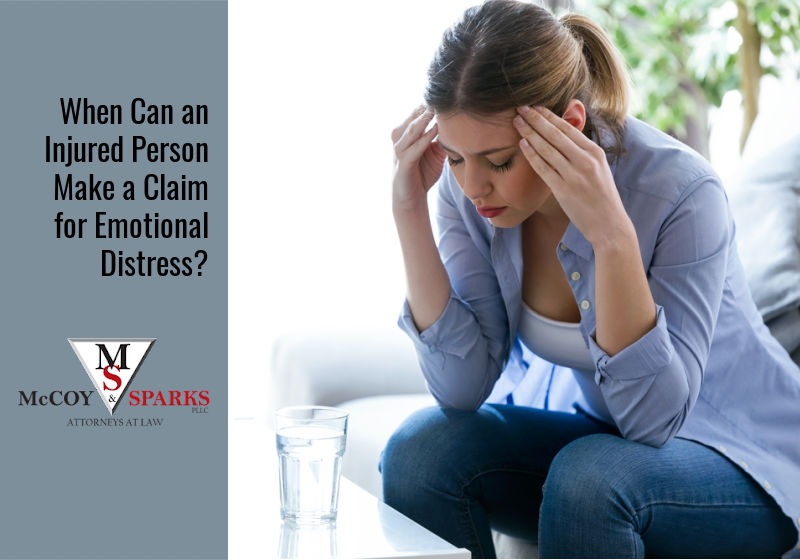 Emotional distress comes under the umbrella of pain and suffering; it’s the “suffering” part. In Kentucky, there are two avenues by which a person may make a claim for emotional distress:

This article will define both of them and explain under which circumstances an injured person can make a claim.

Intentional infliction of emotional distress is difficult to prove, but it is possible to claim in Kentucky, provided 4 conditions are met. The plaintiff must show that:

For example, simply claiming that someone was insensitive or hurt your feelings would not be a sufficient reason to make a claim for emotional distress. The keyword is “severe,” and you are correct in concluding that the term is subjective. It has been further clarified to mean that the outrageous conduct is so egregious that no reasonable person should have to endure it. Such factors as intensity and duration will affect the outcome of a case and you will need proof of how the distress has affected you negatively. Even then, there are no guarantees because the outcome of your case will depend on a jury.

Kroger Co. v. Willgruber (1996): After being employed by Kroger for 32 years, the plaintiff was forced to resign. His new supervisor had filed fictitious reports alleging that his performance was poor and then assured him that he could have a job as an assistant manager in South Carolina. The plaintiff found that this was a lie and that there was no job. When he returned, he suffered an emotional breakdown. At first, Kroger won the case because there was supposedly no evidence of the plaintiff’s emotional damage. However, this decision was overturned by the Kentucky Supreme Court as there was evidence of emotional distress. Punitive damages were awarded.

Osbourne v. Payne (2000): A couple experiencing marital issues sought counseling from their priest, subsequently divorcing. The husband found out that the priest had been having an affair with the wife and was allowed to make a claim for emotional distress. Ordinarily, an affair would not present adequate grounds for intentional infliction of emotional distress case, but because the priest preyed upon the “special relationship” he had with the couple and because he had taken advantage of them precisely when he knew that their marriage was vulnerable, the case was allowed to proceed.

To make a claim of negligent infliction of emotional distress, 3 conditions must be proven:

The rules defining negligent infliction of emotional distress changed in Kentucky in 2013 to remove the “Impact Rule,” the requirement to prove physical impact. The state agreed that emotional distress is indeed possible without a precipitating physical injury. For example, someone who found themselves clinically depressed after being disfigured in a car accident would easily have a case against the negligent driver whose recklessness caused the accident. However, now it is also accepted that someone watching a family member die or be violently injured, for example,  can make a claim against the negligent party if significant emotional trauma can be proven.

In a 2012 court case that set the ball rolling for the demolition of the impact rule in 2013, the Kentucky Supreme Court held that “a plaintiff claiming emotional distress damages must present expert medical or scientific proof to support the claimed injury or impairment,” and this has been the precedent referred to in NIED cases since then. Not everyone experiences emotional distress in the same way, but some symptoms are straightforward.

It is difficult to prove emotional distress, but an attorney experienced in personal injury law will be able to effectively build your case with expert testimony and to prove the extent and significance of your mental anguish.

Make sure to document everything, such as:

At McCoy & Sparks, we have extensive experience with personal injury cases and emotional distress claims. We understand Kentucky law and have a strong track record of success maximizing the recovery of damages for our clients.

If you have experienced emotional distress, whether it was intentionally inflicted or negligently inflicted, we can provide expertise, compassion, and care while we hold the responsible person or entity accountable.

To schedule a free consultation with a McCoy & Sparks PLLC lawyer, call our Bardstown office at 844-4KY-WINS or use our online intake form to get in touch.