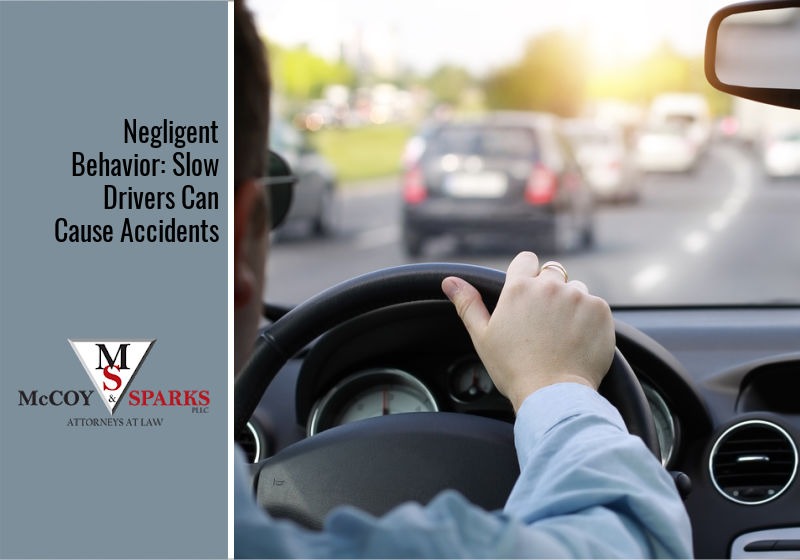 Summary: We think of speeding as negligent behavior, but the truth is that slow driving can be just as risky as driving too fast. Slow drivers can affect the safe flow of traffic, and Kentucky laws have been put in place to prevent these dangerous driving habits from causing accidents. McCoy & Sparks can help you wade through comparative negligence law and help you get the compensation you deserve after a collision caused by slow, negligent driving.

The National Motorists Association recommends that speed limits be set “to the 85th percentile of free-flowing traffic.” This means that safe speed limits are intentionally set slightly below the actual natural speed of traffic. It accounts for drivers to be traveling at relatively the same speed, and driving too slow can put a real wrench in this system.

Driving below the speed limit or driving slower than the traffic around you may be as dangerous—and sometimes even more so—as those who drive with a lead foot.

We know all about the dangers of speeding. There are public service announcements galore, statistics released all the time, and we always check our speedometers when we see a state trooper on the highway. In 2017, speeding killed 9,700 people, which accounted for 26 percent of all traffic fatalities that year.

But driving too far under the speed limit can be just as reckless as zooming down the freeway at top speeds. Here’s what you should know about the negligence of slow driving.

The Legal Repercussions of Driving Too Slowly

Sometimes, reducing your speed is the right choice. The Kentucky Office of Highway Safety recommends that drivers allow extra time to get to their destination in inclement weather, and we slow down around schools, railroad crossings, and near pedestrians and animals. But driving too slow when it’s not expected drastically affect the safe flow of traffic and endanger yourself and others.

We’re all aware of speed limits and maximum speed laws, but in Kentucky, there are also minimum speed laws. The state of Kentucky requires that drivers should avoid driving slow enough to impede traffic and that slower-moving traffic should move to the far-right lane, leaving the left lane free for faster vehicles to pass. And, with Kentucky’s traffic violation points system, you can accumulate points for driving too slowly.

Why Slow Driving is Risky Behavior

Slower driving habits can sometimes be a safer choice. But not always. Here are four instances in which driving too slowly can increase your chance of a collision:

Driving in the left lane except to pass can create a dangerous situation like a traffic backup. A few slow cars can even lead to a traffic jam, especially if two cars are moving equally slowly and blocking both lanes of traffic.

Slow drivers in all lanes can cause other drivers to weave in and out of traffic around you, which increases the chance of an accident.

Some drivers can get frustrated with motorists traveling at unsafe speeds or tailgating too close behind them. They want to “teach them a lesson” by slowing down and forcing them to do the same. This not only creates a dangerous situation, but it can anger the driver they’re trying to control, further compounding the situation and creating the potential for an accident. Road rage can kill.

Blocking other drivers can lead to an accident. The most freeing thing that a driver can realize is that it’s not their responsibility to manage how other people drive. If you are near someone who is driving recklessly, it’s best to just let them pass.

Accidents happen every day as a result of the negligence of others. This doesn’t only apply to speed demons, but to people who are also driving too slowly. If you or a loved one has been injured in an accident that was caused by a slow driver’s negligence, you need help from a qualified attorney.

Kentucky is one of a handful of states that has a pure comparative negligence law on the books. This means that if a person is partially at fault for your injuries, you are entitled to at least partial compensation to cover your medical expenses, lost wages, and other costs that accompany your accident-related injury.

Navigating comparative negligence laws can be tricky, especially if an accident was caused by a driver who was going too slow. Our experienced team at McCoy & Sparks has handled many cases involving drivers driving too slowly. We’ve represented families of loved-ones killed by large trucks moving too slowly on parkways. We’ll put your interests first, and advocate for what’s best for you. Call 1-844-4KY-WINS or contact us today to learn more about what we can do for you.

You owe us nothing unless we recover compensation for you. Make the right call to (844) 4KY-WINS for a risk-free consultation with one of our car accident attorneys today.