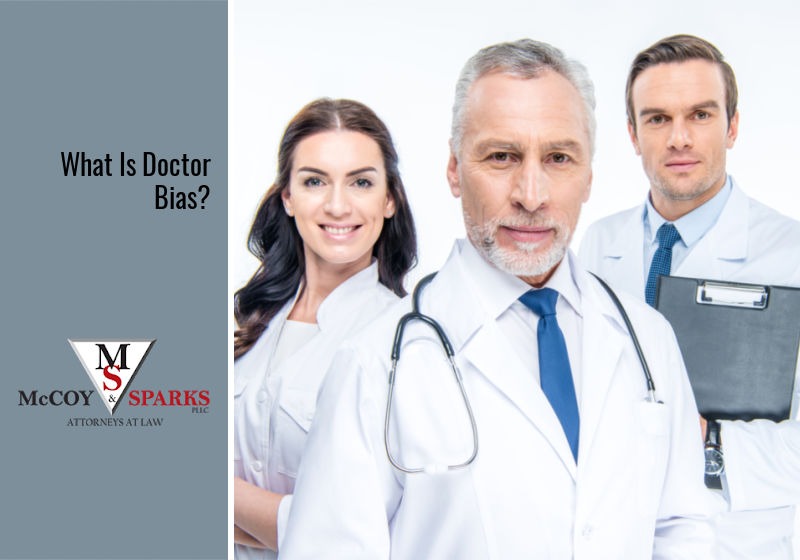 Summary: Some doctors hold negative or prejudiced views about their patients—either explicitly or implicitly—that can affect the care a patient receives and even lead to permanent disability and death. Forty percent of doctors admit to having some degree of bias, and 12 million patients are misdiagnosed each year. How should you proceed if you think you’re a victim of doctor bias and medical malpractice?

Think all doctors are equally qualified to treat your unique needs? Think again.

According to this survey, four in 10 doctors admit to having some degree of bias or prejudice against specific types or groups or patients—and this doesn’t even include doctors who are blind to their own biases or are unable to see or admit to their biases.

Let’s unpack the meaning of doctor bias and how it might affect you as a patient.

What Does “Doctor Bias” Refer To?

Before we get into discussing “doctor bias,” let’s first take a look at the meaning of “implicit bias.” According to the American Psychological Association (APA), implicit bias refers to when a person unconsciously holds negative or prejudiced feelings about a person or a group of people but their conscious attitude differs.

How does this affect the care you receive from a doctor? What is “doctor bias?” Biases can be shown through a doctor’s language, actions, and even the level or kind of care they provide to the patients they treat. They may not be explicitly biased, but they may show other signs of implicit bias.

Psychologists are looking at how specific factors—symptoms of bias like a physician’s use of patronizing language or a patient’s past experiences with discrimination—can affect a patient’s perception of their providers and the care they receive. Implicit doctor bias even can impact the physician-patient relationship and the care for patients with diseases like cancer and diabetes.

What Kinds of Biases Do Doctors Have?

Of the doctors that admit that they have a bias, the most common kinds of bias will shock you; these triggers are widespread traits and characteristics that affect a large number of our population:

These aren’t the only kinds of bias, though. Gender, sexual orientation and race also can impact a doctor’s bias. For example, if you are having a stroke, there is a nine-percent chance that you will be misdiagnosed in the emergency room. This statistic applies to all age groups. However, if you are young, female, a person of color or if you have limited education, your risk of being misdiagnosed for your stroke soars. Just being a woman raises your odds of being misdiagnosed when having a stroke to 30 percent.

When doctors were asked to include other triggers of bias, they cited things like drug-seeking patients, patients who pretend to be ill, patient noncompliance and patients who suffer from chronic pain. All of these triggers directly relate to bias regarding someone’s age, socioeconomic status, race or gender.

Which doctors are most likely to have some kind of bias?

Just looking at OB/GYNs and the care they give their patients, black women in the United States are two to six times more likely to die than white women due to complications from pregnancy and childbirth. And the rates aren’t much better for other women of color.

Doctor bias is real, and it affects how patients are treated every day.

When Doctor Bias Harms the Patient: What Can Go Wrong

There’s a lot of evidence that suggests that in many cases, doctor bias can lead to a misdiagnosis. Doctors are human; they make mistakes. But all too often, these mistakes are a result of a doctor’s implicit bias, and they can lead to serious injury, disability or even death.

Each year across the U.S., 12 million patients see a doctor and walk away with the wrong diagnosis. These misdiagnoses could be harmless, but they also could mean the difference between life and death.

What is the top cause behind these scores of wrong diagnoses? The leading cause of a misdiagnosis is actually bad judgment, which is believed to be a direct result of implicit bias.

David Newman-Toker, director of the Johns Hopkins Armstrong Institute for Patient Safety and Quality’s Center for Diagnostic Excellence, thinks that bias is the main factor that contributes to most wrong diagnoses. When examining 55,377 medical malpractice claims where misdiagnosis led to death or disability, Newman-Toker found that judgment errors related to bias accounted for 86 percent of these claims.

It’s all too easy for doctor bias to turn into medical malpractice, which can have life-altering effects for patients.

If you think you have been a victim of medical malpractice or a missed diagnosis as a result of doctor bias, you need the help of a medical malpractice lawyer from the team at McCoy & Sparks. We will work carefully with you, investigating your claim to determine exactly what went wrong.

Physical and emotional recovery after medical malpractice or a missed diagnosis can be a challenge, especially if doctor bias is a major factor. At McCoy & Sparks, we always work with compassion, keeping your best interest at heart. Your case isn’t like any other, and we’ll advocate for your needs and your recovery.

We’re standing by, ready to help. Call McCoy & Sparks at (844) 4KY-WINS, or get a free case consultation from our experienced attorneys today.

Recognized as one of Central Kentucky’s best law firms for over a decade and counting, McCoy & Sparks works to help people in trouble, representing thousands of clients in Central Kentucky with a focus on providing premium service and delivering superior results.