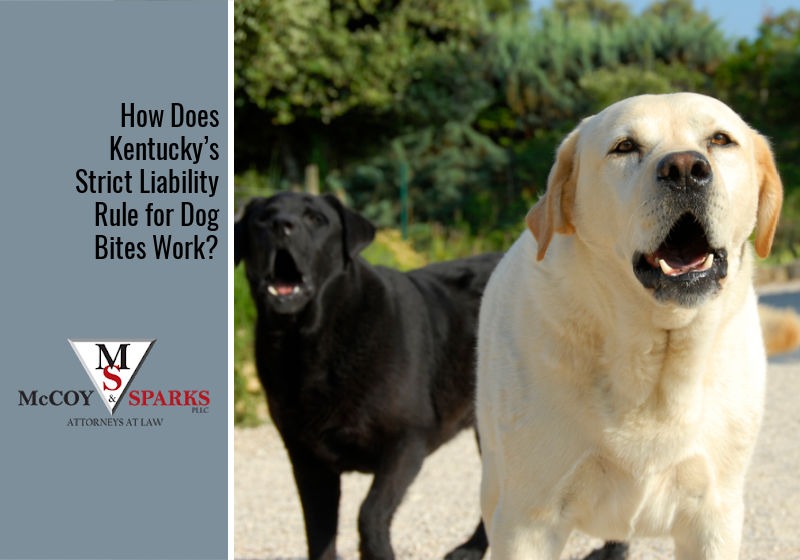 It used to be that dogs and their owners would be allowed one “free” bite before being found liable. This so-called “one-bite rule” was popularized because an owner could claim, “How would I know if my dog was dangerous until their first attack?”

The problem with the one-bite rule, however, was that even though no one was found liable, someone was always bitten. And dog bites can cause severe long lasting injuries.

What Does Strict Liability Mean?

Strict liability means that responsibility is not dependent on whether there is negligence or an intent to harm. In the case of dog bites, this means that even if the dog owner showed reasonable care by having the dog leashed and did not mean for it to attack, the owner is nonetheless responsible for damages caused by the dog. There is no need to prove the dog had previously shown to be aggressive.

Kentucky is also a comparative fault state, which means that if you as the injured person were taunting or provoking the dog, trespassing, or engaging in other behaviors that prompted the dog to bite, then the courts may assign you with a percentage of fault. Any damages you may be awarded would then be reduced by that percentage.

For example, if you were outside grilling and yelled at your neighbor’s sleeping dog, taunting it with your dinner, you would most likely be found liable for a percentage of the damages caused if the dog gets up and bites you. Let’s say the jury finds you 40% liable. So if you were awarded  $10,000 in damages, you would receive 60% of those damages, or $6,000.

In this way, Kentucky  is what is known as a modified strict liability statute.

The Threat of Dog Bites

Jefferson County, Kentucky, was one of the top five counties in the United States for dog bite fatalities in 2019, and eight fatalities alone have occurred in Kentucky since 2017.

In 2019, 42% of dog bite injuries leading to fatalities occurred off the owner’s property, and 27% of all Americans killed by dog bite injuries were children aged 9 and younger. Children traditionally are more vulnerable to dog bites and attacks, and recent studies have shown that there has been an increase in dog bites among children since the beginning of the pandemic.

Not all dog attacks result in fatalities, of course, and approximately one-fifth of people bitten by a dog require medical attention, with an estimated 4.5 million dog bites occurring each year in the United States.

What to Do If You’re Bitten

If you or a loved one has been bitten by a dog, seek medical attention right away. Because of rabies, you will want to be sure to collect vaccination records from the dog’s owner if possible and get the wound cleaned to avoid bacterial or spreading infection.

Many dog bites will require stitches and proper wound dressing to heal without complications. More serious dog attacks may require surgery and hospitalization, as deep lacerations, punctures, muscle injuries, broken bones, and injuries to the head and neck can occur among other severe wounds.

You will also want to report the dog to animal control or the police department after the attack. This will document the attack and allow animal control to assess whether the dog needs to be deemed a danger and dealt with accordingly.

After you have seen a medical professional for your injuries, make sure to contact a Kentucky personal injury lawyer with experience in dog bite injury law to get a risk-free consultation on your case. Since 1997, McCoy & Sparks has represented countless people on dog bite cases and have obtained large six-figure settlements for victims of dog bites. Let us help you.

You owe us nothing unless we recover compensation for you. Make the right call to 844-4KY-WINS for a risk-free consultation with one of our attorneys today.

Dog bites in Kentucky: It used to be, before the legislature acted, a plaintiff would have to prove that the dog’s owner knew of the dog’s dangerous propensity. And that developed in what was called the one free bite rule. The first time that dog bit anyone, the owner wasn’t responsible. The owner could say, reasonably, “I had no idea my dog would have bit someone. I didn’t know of its dangerous propensity.” And that was the law.

It didn’t make a lot of sense because you still got bit by a dog. And eventually the legislators just decided if your dog bit someone, you’re responsible. So they incorporated what’s called a strict liability policy. So it did away with the one-bite rule. Now I don’t have to prove, if I’m bitten, that you knew your dog was dangerous. You had your dog, you chose to keep that dog, it bit me, now you’re responsible for the damages.

And it also said that strict liability, which typically means if I prove that dog bit me, then you are liable. Period. It became then a big fight: Does that mean that you are entirely liable? Meaning, it doesn’t matter, your dog bit me. We talked about that comparative fault chart. Does that mean that you’re 100% responsible? A jury doesn’t have to divide the pie?